Lok Sabha Election Results 2019 Live Vote Counting: The Modi wave has swept out various other opposition parties in most parts of India and the Bharatiya Janata Party is all set to return once again to power as it led in 296 seats. BJP made spectacular inroads in Trinamool Congress-ruled West Bengal, with the trends of the Lok Sabha elections displaying that the saffron party was leading in 17 seats out of total number of 42 seats, up from only two last times.

If the Lok Sabha election result movements be the same, the BJP would have upgraded on its 2014 year’s performance when it had won total number of 282 seats on its own in the 543-member Lok Sabha.

The celebration is already in the markets, as the benchmark BSE Sensex reached 40,000 for the first time and NSE Nifty breached the 12,000 level.

On the other hand, Congress Party somehow managed to get 54 seats out of 543 total seats in Lok Sabha. While in Uttar Pradesh the party only managed to get one seat. Even, Congress President Rahul Gandhi was losing BJP’s Smriti Irani in Amethi by closely 7,000 votes but was evidently ahead in Wayanad in Kerala.

The Bharatiya Janata Party, not only swept through the Gujarat, which was already expected, but also won most of the seats in West Bengal, Odisha, Maharashtra and Karnataka where it was not such exppected. Only Kerala, Tamil Nadu and Andhra Pradesh seemed to be untouched. Also in Telangana, where it was expected to toll below par, the BJP was still ahead in four seats, the same as the Telangana Rashtra Samiti.

The 2019 Indian general election is completed and it was held in seven different phases from 11 April and was concluded on 19 May 2019 in order to establish the 17th Lok Sabha. The counting of the votes are going to be held on 23 May, and on the same day, the results are going to be announced.

There were around 900 million Indian citizens who were eligible to vote in one of the seven phases on the subject of the region. The 2019 elections involved a total turnout of voters of more than 67% which is considered to be the highest ever in the history of Indian general elections.

As per to the Election Commission of India, there were about 900 million people were eligible to vote, with a growth of 84.3 million voters since the last general election which was held in the year 2014 making this the largest-ever election in the world.

There were total numbers of 71,735 overseas voters who have been enrolled in the electoral rolls for the 2019 Lok Sabha elections.

This year Lok Sabha election in 2019 was the highest recorded contribution in Indian elections by women. As per to the most exit polls released on 19 May 2019, states The Washington Post, the BJP-led alliance and current prime minister Narendra Modi seemed self-assured to win re-election.

The counting, as well as the result declaration of Lok Sabha 2019, will be on 23 May 2019. The counting of the votes will start from 9 am. All 543 elected MPs are going to be elected from single-member constituencies using first-past-the-post voting. The President of India put forward an added two members from the Anglo-Indian community if he considers that the community is under-represented.

Here is the list of all the seats in different State/Union Territory of Lok Sabha Election 2019:

BJP-led NDA set to sweep Lok Sabha Polls with over 300+ Seats here is the quick overview of the positions as of 3.30 PM

Counting is going on and so far the state wise General Election Results are: 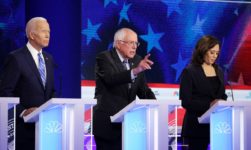 Small Number Of Tanks At Trump’s Fourth Of July Event, Participate As Part Of A “Static Display”